Most people will say that a blender is an absolute kitchen essential, but won’t think twice about buying a food processor unless they’re a real cooking fanatic. The reality is that oftentimes food processors are more versatile than their blender counterpart. Blenders are ideal for mixing things with a lot of liquid (e.g., smoothies and soups) but food processors can chop, slice, puree, and so much more.

Be honest: How many times have you been using a blender and had to stop every few seconds to add more liquid just to get it to blend? You won’t have that problem with a food processor.

Nutribullet — the brand known for its compact portable blenders — entered the full-size food processing game with their new 7-cup food processor, launched in November 2021. This new model is an amped-up version of its mini predecessor (the Kitchen Express blender/food processor combo) with a more powerful motor, a bigger work bowl, and enough attachments that you might never need to use a knife again.

I set out to see if the Nutribullet food processor is as reliable, powerful, and worth the money as the brand’s blenders and air fryer by working my way through every single attachment and setting. I made salsa, spiralized noodles, chopped and shredded vegetables, and even made a pie dough. The verdict? This is potentially the easiest to use, most versatile food processor I’ve tried to date. Read on for all the details on the included accessories, the testing process, and more.

How does the Nutribullet food processor work?

The Nutribullet 7-cup food processor comes with the following: The bottom of the motor base is also fitted with four suction cups (genius!) so that it won’t slide around on the counter while you’re using it.

Assembly and storage of the Nutribullet food processor

In terms of assembly and disassembly, the Nutribullet food processor is extremely user-friendly. The work bowl can be placed directly on the motor base and turned clockwise to click and secure it on prior to use. The lid for the work bowl is secured in the same way — just place on top and turn clockwise until you hear a click. There are arrows or instructions labeled on pretty much every accessory and piece of the food processor, too, so even if you don’t remember exactly how to get started, the labels will guide you.

All the accessories easily slide on and off the blade adaptor and are easy to grab by the center plastic rings (no sliced fingers here). For storage, unfortunately not all of the blade attachments can be stored in the work bowl at once. You can choose from two different storage options: the chopping blade, dough blade, and both of the slice/shred discs, or the chopping blade, dough blade, one of the slice/shred discs, and the spiralizer disc. Either way, only one of the disc attachments will be left out at a time, which is still a pretty solid storage solution.

If the thought of cleaning a food processor has kept you from buying one so far, you’re in luck. Every single piece that comes in the Nutribullet food processor box (aside from the motor base, obviously) is top rack dishwasher safe. I washed every attachment in the dishwasher after using and each one came out sparkling clean with very little effort on my part. The motor base can easily be wiped down with a damp cloth to handle any accidental spills.

You might be asking what you can make with a food processor but the real question is: What can’t you make? It’s ideal for whipping up dips, sauces, shredded salads, and dumpling fillings, and can chop, slice, or spiralize pretty much anything. With that being said, getting your veggies in is a breeze with this gadget, since you’ll literally never have to hand-cut a vegetable again if you don’t want to. 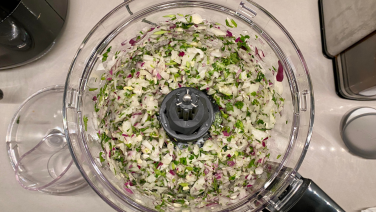 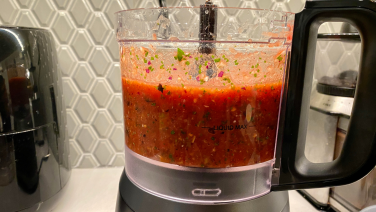 The chopping blade is great at both cutting through veggies and blending salsa.

I found the pulse setting combined with the chopping blade to be the ideal tool for making restaurant-style salsa. An issue with making salsa in a blender is that it turns it into a completely smooth liquid, and the blades often spin too fast so that the tomato product gets frothy. While testing the Nutribullet food processor, I combined garlic, onions, and cilantro first and pulsed a few times until everything was chopped roughly (this technique would also work perfectly for chunky salsas like pico de gallo). I then added in whole canned tomatoes, chili peppers, lime juice, spices, and salt, and ended up with a beautiful salsa that still had some texture, but no froth. I tested each attachment using a variety of different vegetables. Each slicing/shredding disc can handle tough veggies like carrots and radishes, but can also cut through softer vegetables like mushrooms without crumbling them up. If you’re looking for uniform slices, this food processor will do it better than you can with a knife.

The shredding attachments are best used for hard cheeses, harder greens like Brussels sprouts, and crunchy veggies like carrots or potatoes (homemade hash browns, anyone?). I tested both the thick and thin shredding attachment using Napa cabbage, and while the cabbage shredded, it proved to be a bit too delicate for the powerful blades. It released a good amount of water and kind of fell apart after shredding, which I imagine would also happen to other high-water content greens like lettuces. If you want to shred softer greens, using the chopping blade at a pulse is a slightly better option. While the pieces will be smaller than a traditional shred, you won’t extract water and your greens will stay crunchy. I’ll be honest, I didn’t know if the spiralizer was going to work, but I’m happy to report it works way better (and is way easier) than a traditional hand-crank spiralizer. It created long, curly noodles and barely wasted any of the squash at the end, slicing nearly all of it. I only removed a tiny, thin edge from the top of the disc after I was done shredding a whole yellow squash.

The dough blade also worked well for both cutting butter into flour and kneading. It should only be used at low speed or you risk overworking your dough, but the blade itself is made of a soft plastic, so doughs won’t be mixed too aggressively.

Is the Nutribullet food processor worth it?

I love this tool for low-effort food prep — it will literally save you hours of slicing, chopping, and shredding. It’s almost easier to clean up than the classic knife and cutting board combo, too, since every part can just be tossed in the dishwasher.

Other 7-cup food processors from top brands run from about $99.99 to $129.99, but typically only come with one shredding/slicing disc and one chopping blade. The Nutribullet 7-Cup Food Processor has a retail price of $119.99, so it’s sitting right within the average price range, but comes with significantly more accessories. Sure, you can get a food processor that’s the same size for $20 cheaper, but considering that you’re getting a dough blade, a chopping blade, a spiralizer disc, and two different shredding/slicing discs with the Nutribullet, the cost is a no-brainer.