When Israel came to a standstill in March 2020 at the onset of the COVID pandemic, shops, restaurants and offices shut down as part of a nationwide lockdown.

But for Israel’s hungry, there was no break.

On the contrary, the closure of corporate dining facilities, restaurants, hotels and military base cafeterias left them more vulnerable because suddenly there were no excess meals from these institutions to donate.

For Leket, Israel’s leading food rescue organization, this was an immense challenge. The main sources of surplus food for the hot meals that Leket provides daily to tens of thousands of needy Israelis had vanished overnight.

“People needed to eat now, not later. We had to act immediately,” Leket CEO Gidi Kroch said. “We had to come up with some out-of-the-box approaches and dig deeper for new sources of food because it quickly became evident that COVID was changing the world — perhaps long term.”

Even before the pandemic, nearly 20% of Israel’s population of 9.2 million was food insecure. The pandemic, which put some 1 million Israelis out of work, pushed an additional 150,000 Israelis into food insecurity, according to Leket, including middle-class families who had not required assistance in the past.

For Leket, which before the pandemic provided nutritious meals to some 175,000 Israelis every week, that meant an increase to 246,000 people each week. This at a time when many of the organization’s 330 direct-service nonprofit partners, such as free community restaurants, meals-on-wheels operations and afterschool programs, were forced to close because of COVID restrictions.

There was one bright spot, however.

Suddenly there was a dramatic increase in the availability of fresh produce to be rescued: all those fruits and vegetables that hotels, restaurants and caterers weren’t using. With some help from partners like the Israel Defense Forces, McDonald’s, Strauss foods and Coca-Cola, which donated trucks for picking up and delivering the excess produce, Leket swung into action.

The food was brought to municipal distribution centers, where local volunteers delivered it to the needy households. 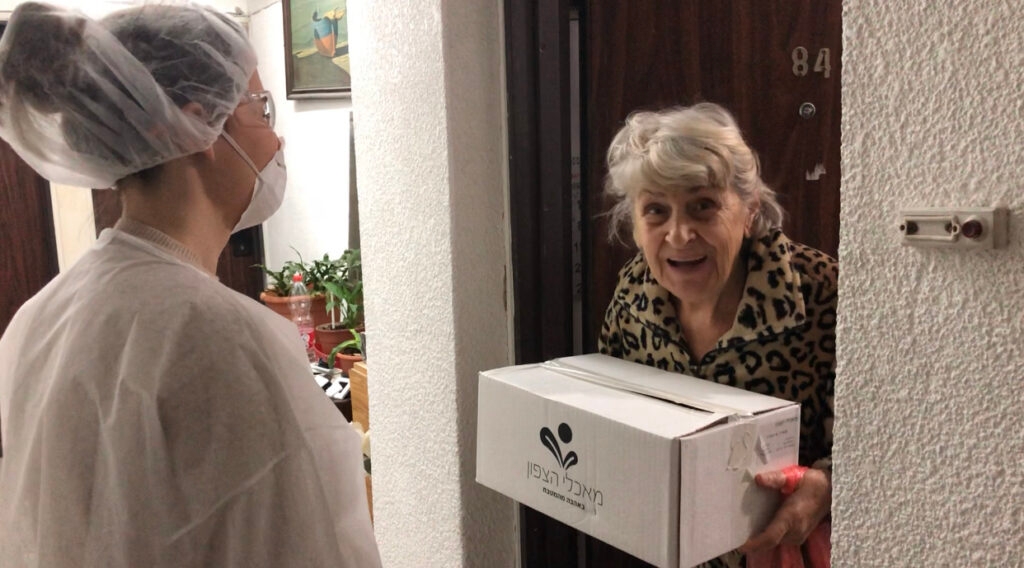 Employees from the Israel Electric Company deliver boxes of fresh fruit and vegetables to Holocaust survivors living in government-subsidized housing in the Haifa area in a Leket-organized initiative during the early weeks of the pandemic. (Courtesy of Leket)

In one initiative, employees from the Israel Electric Company, which before the pandemic donated 500 surplus meals daily to Leket from its cafeterias, delivered boxes of fresh fruit and vegetables to Holocaust survivors living in government-subsidized housing in the Haifa area.

“We felt terrible that we had no extra food to give Leket, so we turned to them and asked if we could help in another way,” said Ohad Levy, information technology director of the company’s power grid division. “Fortunately we were able to ‘adopt’ Holocaust survivors and deliver produce boxes to them at least once a month.”

Levy added, “I know from my own childhood what it is like not to have enough food. So I pressed hard with IEC management to establish a food rescue program. It’s about providing proper nutrition for kids and dignity for older people.”

Leket was founded in 2003 by Joseph Gitler, an American immigrant, with the goal of reducing food waste and addressing food insecurity in Israel. It does this by harvesting surplus agricultural produce and collecting cooked meals, then sorting and distributing them to the needy throughout the country. Leket donates only food that is nutritious and meets food safety regulations.

In 2020, Leket supplied a total of 2.3 million hot meals and salvaged 41 million pounds of fresh produce from 600 farmers.

The first year of the pandemic turned out to be one of Leket’s most critical ever.

To address the challenge of fewer prepared meals, Leket launched a meal purchase program with caterers that enabled them to bring their workers back from furlough to help cook the meals. A specific fundraising drive by Leket paid for the initiative.

The food was prepared for distribution by nonprofit community partners or handed out at central distribution points. For homebound clients, Leket staff and volunteers provided door-to-door delivery, supplying them with six to eight meals that could be refrigerated and heated up as necessary. The number of people on Leket’s daily food program rose from 9,000 before 2020 to 13,000 during the height of the pandemic.

A year ago, Leket launched a “Meal for Two” initiative that purchased nutritious cooked meals from struggling restaurants, benefiting both the beleaguered restaurants and the needy. Leket also entered into a partnership with a local salad company to use Leket’s excess carrots, tomatoes, cucumbers, peppers and eggplants to prepare salads for beneficiary agencies. 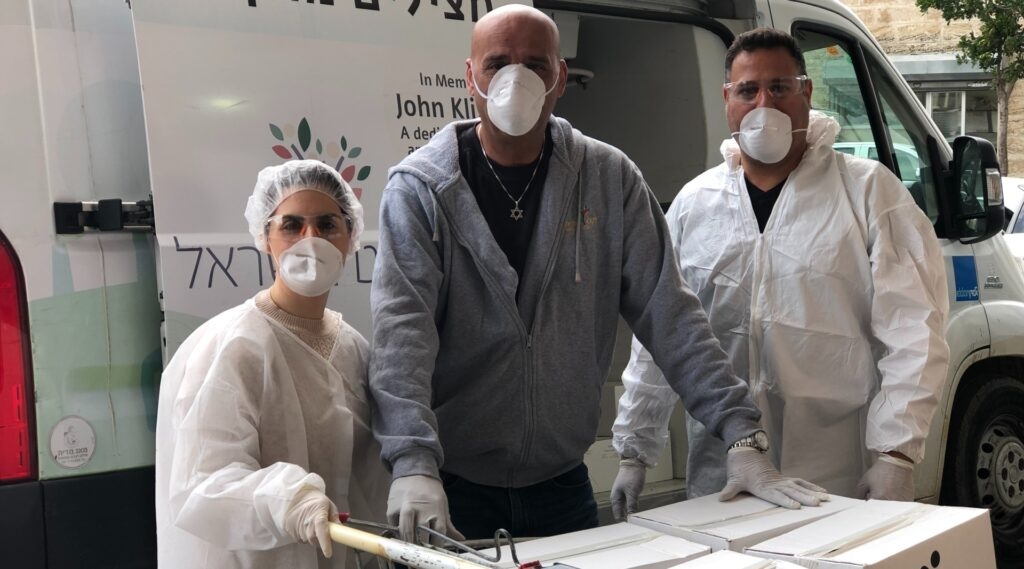 Volunteers deliver the food that Leket rescues to the homes of needy Israelis. (Courtesy of Leket)

“A lot of donors disappeared when COVID hit, but Leket stuck with us big time,” said David Agaev, director of Echpat, an organization that houses and rehabilitates homeless people in South Tel Aviv. The group uses food handouts to convince homeless people to avail themselves of units in the organization’s 12 apartment complexes.

“We build trust through food,” Agaev said. “When people are on the street they’ll take water and a fruit or vegetable from you.”

Leket currently provides prepared food to 164 residents of Echpat’s apartments, saving Echpat $5,600 per month in food costs, according to Agaev.

“During COVID, as more people became homeless, Leket’s staff was available to us even on weekends,” Agaev said. “They are already planning with us for Rosh Hashanah.”

With COVID infections mounting and Israel reinstating many pandemic-era restrictions and considering another national lockdown, Leket officials are concerned about the continued growth of food insecurity. Food rescue should be a central solution, they said.

“The government must get involved,” Kroch said. “It needs to acknowledge the need for food rescue as part of the government’s nutritional sustenance programs and help finance it.”

In the meantime, Leket is raising additional money to provide cooked meals to Israelis for the upcoming High Holidays and making contingency plans to provide food packages that can last for a week in the event of another holiday lockdown. By Rosh Hashanah, Leket will have rescued 18,000 tons of agricultural produce and collected 1 million meals for the needy this year.